The Arlene Schnitzer Concert Hall is an historic theatre and performance arts center in Portland, Oregon. Originally called the Portland Publix Theater and then Paramount Theatre before taking on it’s current name, it’s often referred to as “The Schnitz” locally.

There are a wide range of live concerts and events scheduled throughout the year at the theatre.

Click here to view the concert schedule at the Arlene Schnitzer Concert Hall.

The Arlene Schnitzer Concert Hall is part of the Portland Center for the Performing Arts which, as well as hosting concerts and films is also the home of the Oregon Symphony, the Portland Youth Philharmonic, the Metropolitan Youth Symphony, the White Bird Dance Company and Portland Arts & Lectures. The theatre is a cultural landmark in Portland.

The theater has 2,776 seats for patrons including both orchestra level and balcony level seating. It also features a portable and flexible acoustical shell making the interior excellent for music concerts. It has dressing rooms for 90, the stage is 94 × 32-foot with a 54 × 32-foot traditional proscenium. There is also an orchestra pit for 15 and a choir loft.

The building was placed on the National Register of Historic Places in 1976, and was renamed after Arlene Schnitzer in 1984, a Portland resident who contributed generously to it’s renovation along with her husband Harold Schnitzer. 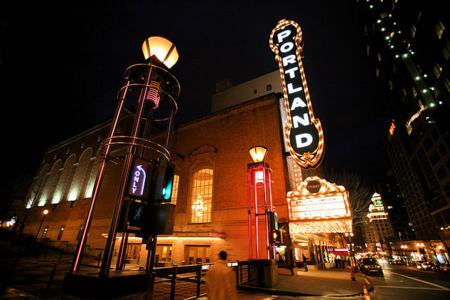 The Arlene Schnitzer Concert Hall has a rich history dating back to when it first opened in 1928, and was originally called the Portland Publix Theater. From 1930 onwards it was renamed the Paramount Theater due to a contract to show the films of Paramount Pictures. The theater showed films until 1972 and then hosted concerts thereafter.

There were a number of large theater houses on Broadway in Portland and the Schnitz was the last surviving theater building on the street. There is access to the building on both Broadway, Main Street and Park Avenue. The building can be seen from a distance even at night due to the “Portland” sign above the Broadway marquee, which at 65 feet high features approximately 6,000 theatrical lights. From 1930 to 1984 the sign read “Paramount”.

The building was designed by the architecture firm Rapp and Rapp and modeled in an Italian renaissance style. In the same year of it’s opening in 1928, an unusual robbery occurred at the theater. In July of that year, Robert Nolan, a Southern California resident appeared as an extra in the movie “Wheel of Chance”, and once back in Oregon saw the movie was playing at the theater and attended in order to see himself on the big screen. However while in the lobby he saw two staff members carrying that day’s receipts and while watching the movie decided to get some extra cash. So he held up the attendants for $1176 at the box office. Nolan was arrested days later. He had spent nearly all the money (with only $1.50 left) on drinking parties and bootleggers (as during this time period there was a prohibition on alcohol in the United States.)

During the 1930’s the theater hired a “psychic” and musicians to entertain the patrons in the lobby before the showing of movies to attract more business. In 1936 the Evergreen chain purchased the theater along with John Hamrick. They also owned eight other Portland based movie theaters.

The building changed ownership again 35 years later as it desperately needed maintenance and was bought by John Haviland in 1971. Haviland was the owner of the Park-Haviland Hotel. The theater was subsequently leased to Tom Moyer, who owned a chain of movie theaters. Haviland considered the theater was not economical to operate as a 3,000 movie theatre in the age of television, and so the last movies were shown in August 1972.

Haviland auctioned off many of the fittings inside the building in March 1975, including the pipe organ, 3 grand pianos, a suit of armor from the 16th century and many other items such as antique furniture. The audience however objected to the sale of a marble statue called “Surprise” (which was a nude girl with her hands thrown across her face, that had a missing finger that was shot off during a box office robbery in the 50’s) and so they collectively raised $5,233.97 in order to keep it in the theater lobby.

The Theater was sold again in August 1976 to West Coast Theatres. In 1983, The City of Portland (city council) condemned the building (officially declared the building to be unfit for use or consumption) and paid $4.1 million dollars to the owner in compensation for it. From costing $500,000 in 1928 to build, the building is now estimated to be worth more that $32 million. Major renovations started in September 1983 using the designs of Boora Architects to achieve a restoration faithful to it’s original design.

Among the various restorations was the 65 foot high sign reading “Paramount” being replaced by a replica sign reading “Portland” (which is what the sign read from it’s opening in 1928 to 1930). The theater was re-opened in September 1984 and named after Arlene Schnitzer, a resident who, along with husband Harold Schnitzer, contributed generously in a restoration that took one year and $10 million.

Presently, the Arlene Schnitzer Concert Hall hosts music concerts of many different genres including classical, pop, rock and jazz. Other live performances and events include theatre, dance and arts, as well as hosting conferences, weddings and travel films. The venue has a wonderful atmosphere and a wide selection of concerts and events for you, your friends and family to enjoy.

The building is surrounded with plenty of parking, many restaurants and hotels and is a major cultural, historic and architectural attraction in Portland.